After five days of intensive learning, networking and socialising, the 67th Lindau Nobel Laureates Meeting wrapped up in festive fashion on Friday, 30 June, with a day-trip to Mainau Island. Delegates spent the day walking and picnicking on the picturesque island before partying it up on the boat on the way home.

The atmosphere of international friendship was palpable as delegates from around the world danced shoulder to shoulder, and one or two Nobel Laureates even hit the dance floor together . Earlier in the week at the International Get-Together hosted by Mexico, Mexican officials emphasised this same international spirit, saying that Mexico “believes in building bridges, not walls”.

ASSAf delegate, Dr Hlamulo Makelane, University of the Western Cape/HSRC, did her country proud in her closing remarks to the meeting. Her honest and heartfelt words moved many in the audience.

“We’ve learned a lot, not only about chemistry, but how to tackle issues in this field of research,” she said. “Having almost 400 people in the same place was a wonderful thing, I felt I had the world in my hands. I ask you all to keep the connection that we have made going, because we are the future. We are the Nobel Laureates of tomorrow.”

Makelane will now continue her journey of scientific diplomacy when she joins a group of 17 international delegates on a week-long tour of the academic institutions of Baden-Württemberg. They will visit research institutions and universities around the region as part of the Baden-Württemberg post-Conference Programme.

Another South African delegate, Dr Nolwazi Nombona, University of KwaZulu-Natal, says that the meeting has led to concrete plans for collaboration with a Japanese delegate who works in her field, developing new materials for diagnostics, environmental sensors or renewable energy applications.

“I saw his poster at one of the sessions and realised that his work could really help me with what I am working on,” she says. “Then by chance, we sat down at the same table at the Mexican Get-Together.”

Now, they are planning to apply for international funding through the National Research Foundation (NRF) Mobility Grant as well as the South Africa/Japan Joint Science and Technology Research Collaboration funding programme.

“There are only four projects awarded through the SA-Japan programme, but if we can get that, we’ll have a real collaboration. It’s very exciting,” she says.

She hopes that this will be the start of a long-term agreement.

“You can never say at the beginning what benefits an international collaboration will bring.”

And that is the real beauty of a meeting like this one. It is difficult to quantify immediately what benefits this meeting will bring for the South African delegates, and South Africa as a whole. But it’s in the slogan of the Lindau Nobel Laureates Meeting: Educate, Inspire, Connect. The knowledge, connections and inspiration these young scientists carry back to their lives and work will undoubtedly shape their careers for years to come. 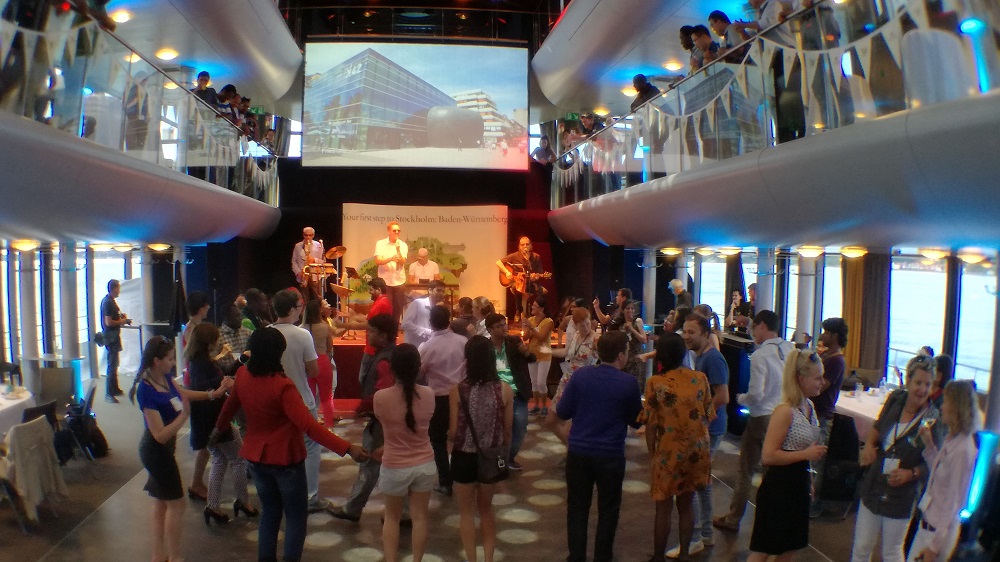 Caption: International delegates to the Lindau Nobel Laureates Meeting party it up on the boat back from Mainau Island. Image credit: Paul Kennedy