The clock, the brain and the fly: the story of circadian rhythms

South African (SA) young scientist Blessing Ahiante of North-West University who is attending the 68th Lindau Nobel Laureate Meeting said that learning about the genetic clock made her think about stress in African populations in new ways. “I can relate because most people in SA are stressed in some way: not sleeping, not resting, working all the time,” she said. “I was interested to learn how these stressors can influence the genes.” 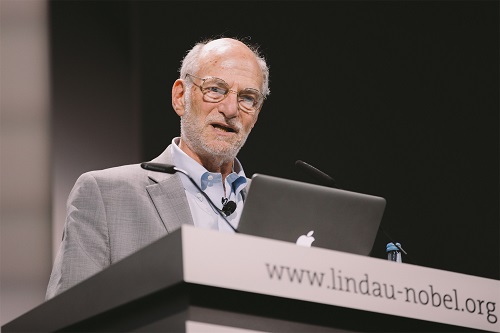 The Lindau Nobel Laureate Meeting programme started with the topic du jour in biology right now: the biological clock, known to scientists as the circadian rhythm. Professors Michael Rosbash and Michael Young won the Nobel Prize in Physiology or Medicine in 2017 (along with Professor Jeffrey Hall) for the discovery and description of this internal genetic mechanism, which influences animal health and behaviour by controlling periods of activity and sleep, influencing hormone control and dictating periods of metabolic activity.

“The purpose of these rhythms is to anticipate what’s going on in the outside world,” said Rosbash. “In simple terms: the early bird gets the worm; the early worm avoids getting eaten by the bird.”

Young explained some of the history of circadian rhythm research; the first significant discovery was that rats kept in constant darkness exhibited a pattern of activity despite no outside stimulation. Soon after, researchers identified the region of the brain involved in these patterns, known as the suprachiasmatic nucleus (SCN).

Rosbash, who is based at the Howard Hughes Medical Institute, described in his address the path of his genetic clock research from an early landmark paper on the daily rhythms of fruit flies, through to the award of the Nobel Prize. Both Rosbash and Young said how important the common fruit fly (Drosophila melanogaster) has been to their research. Rosbash showed clearly how similar Drosophila and human circadian genetics are, while Young went as far as to acknowledge the fruit flies in his final slide – “I’d like to thank the fly.”

D. melanogaster is an ideal subject to study genetics, especially in the brain: there are only 75 neurons linked to the internal clock in the fruit fly brain, and their skin is thin enough that researchers can use an experimental method called optogenetics. This involves using coloured light to switch specific genes within the brain on and off, and revolutionised the study of the internal clock and many other fields. In general, fruit flies and humans share a great many similarities in their sleep and other daily behaviours. How similar? Young mentioned that in one study of fruit fly activity, they noticed that most flies take a siesta in the early afternoon.

Through the 1970’s and 1980’s, Rosbash and Young independently used mutated fruit flies to identify genes that dictated sleep and other rhythmic behaviours in fruit flies, humans and other mammals. One notable experiment saw researchers search through almost 7000 mutant fruit flies for mutations relating to the circadian rhythms.

“In about the last of those bottles we saw a new mutant, and called it timeless,” says Young. This mutant pointed to a gene later found to transcribe a protein that served as a clock marker – the mechanism at the heart of the circadian rhythm.

What we know now is that these biological clock genes control more than 70% of the human genome – almost the entire genome is switched on and off at different times of the day. Rosbash and Young are now looking at how the clock system relates to human disease, either directly in the case of sleep disorders, or indirectly in the case of cancer risk when circadian rhythms are disrupted.