Does genome editing mean progress or peril for the future of human health?

Genome editing may sound like science fiction, or perhaps something from a horror movie, but it is a process as old as life itself. All organisms edit their own genes, humans have edited genes (without knowing it) since the dawn of agriculture, and now genome editing technology offers the chance to treat incurable genetic diseases like cystic fibrosis or Huntington’s disease. Delegates at the Lindau Nobel Laureate Meetings gathered to discuss the ethical, social and scientific challenges around topics like CRISPR/Cas9 gene editing technology and the ‘designer baby’ phenomenon. 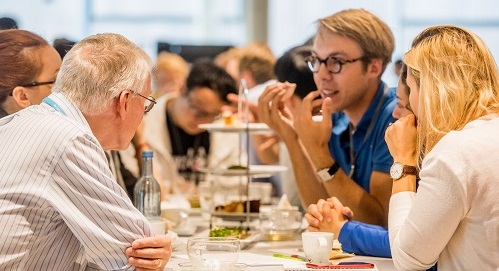 Nobel Laureates and delegates get to grips with the challenges, concerns and opportunities of genome editing. Image credit: Patrick Kunkel/Lindau Nobel Laureate Meetings.

After brief introductions from Sir Tim Hunt, Professor Richard J Roberts and Professor Peter Dabrock (German Ethics Council), delegates and Nobel Laureates were encouraged to talk about these challenges in small groups, guided by their interests and the introductory statements.

Delegates agreed that for gene editing to be safe and effective, it should be taken up slowly, first trying only to treat the most serious diseases and at the same time developing regulation carefully and ahead of technology uptake. This is particularly important because population-level research is still lacking, and the consequences of widespread genome editing are not understood at all. In a recent example, there is new evidence that CRISPR/Cas9 gene editing works at odds with a protein called p53, which is responsible for DNA repair and is often involved in cancer. Despite this, patent applications for the use of CRISPR/Cas9 in humans are going ahead.

“We can’t know the outcome of changing our genomes,” says Blessing Ahiante of North-West University. “In trying to solve one problem, you may create another problem, which could be worse.”

This is closely linked to the problem of public understanding. A technology like genome editing is poorly understood by the general public.

“People need to be educated with regard to gene modification,” says Ahiante. “Those doing it must be trained, taught how to relate information: this is the aim, this is the outcome, these are the disadvantages. We have to allow the public to make an informed choice.”

Delegates agreed that the concerns of the public around GMO’s and genome editing are valid, and that more could be done to acknowledge those concerns. They recognised that as researchers, they have a responsibility to the public: to explain their work but also to listen to the public’s opinions and attitudes.

“I’ve realised it is important to talk more to the public, and try to do more outreach work: talk to people, understand their concerns, and examine the potential social impacts of new technology,” says Jia-Xing Yue, a young scientist attending the meeting. Two-way conversations throughout the process of developing a new technology and the regulations around it will ensure that the public is informed and supportive of that new technology, and that any risks are addressed appropriately.

Another key message coming from the discussion is that genome editing is a ‘nice-to-have’ technology that will benefit developed countries and the privileged upper class for the most part. In developing regions around Africa and poorer communities around the world, the best way to address urgent health challenges from environment and lifestyle is not through gene editing.

“The DNA sequence is only one small aspect of human health,” says Ahiante. “Most diseases don’t affect the DNA at all. The gene was exposed to something from the environment, that’s what you need to treat.”

The young researchers left the discussion engaged and informed about the complex and challenging future of genome editing. If some of these ideas and concerns are incorporated into future research and policy development, genome editing is set to permanently improve human health.