“As a Nobel Prize winner, you can choose to take the role of Laureate in all sorts of directions. For me, I want to change the world as positively as possible, and I’m prepared to step out of my comfort zone to do it.” 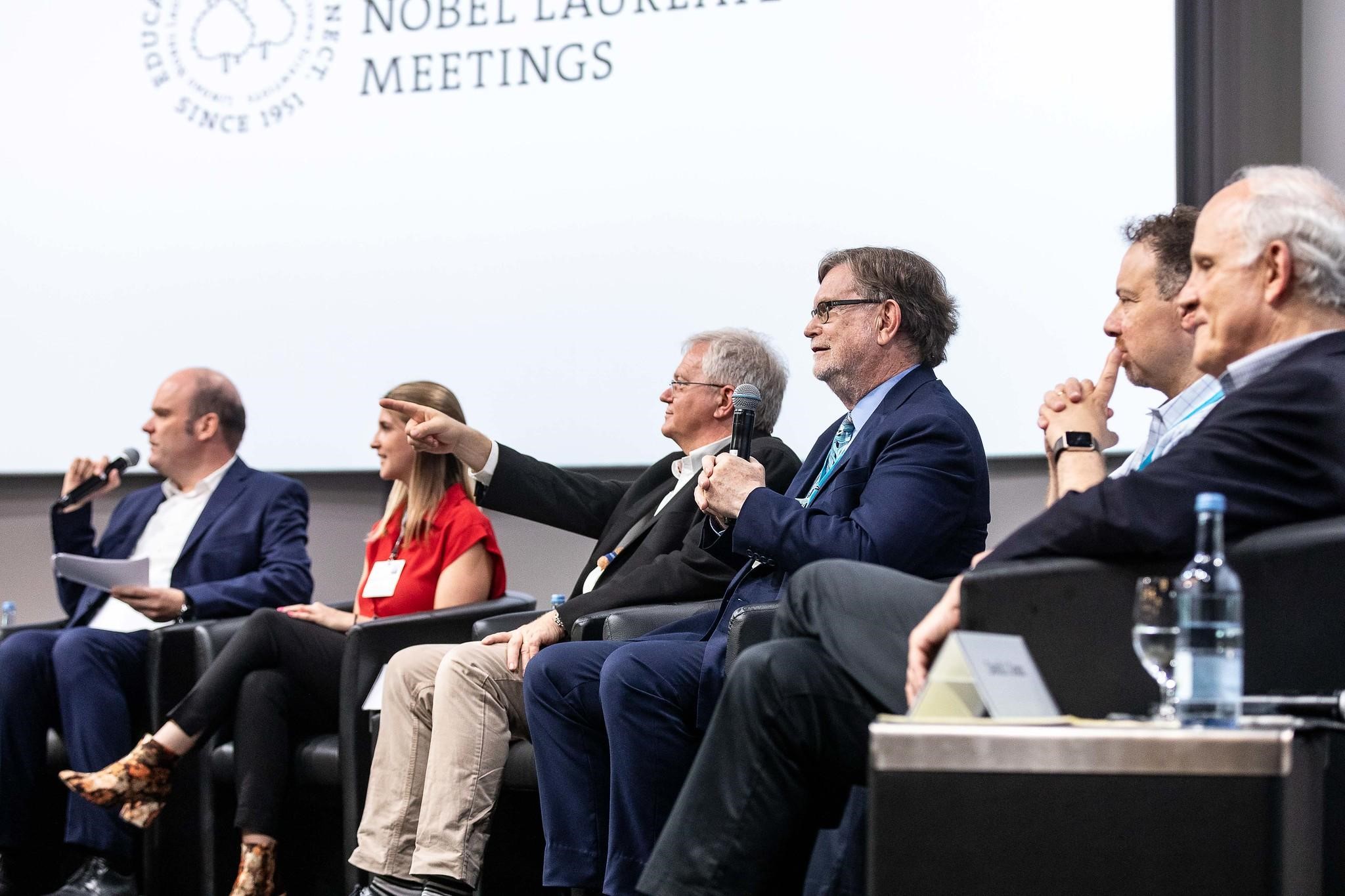 Prof Brian Schmidt (3rd from left) calls on all researchers to make the world better. “Know your biases, be inclusive, show patience and show respect to everyone around you. If we all do this, we can make a difference.” Credit: Christian Flemming/Lindau Nobel Laureate Meetings.

Prof Brian Schmidt won the Nobel Prize in Physics in 2011 (along with Saul Perlmutter and Adam Riess) for proving that the expansion of the universe is accelerating, and since then he has become a vocal advocate for the role that scientists and researchers should play in the 21st century.

For Schmidt, stepping out of his comfort zone meant becoming Vice-Chancellor (VC) of the Australian National University (ANU) in 2016; a role that he takes as seriously as he does his science.

In his keynote address to the 69th Lindau Nobel Laureates Meeting and at various times throughout the conference, Schmidt reminded young researchers of the responsibility of their position, encouraging them to help make the world a better place for all people.

“The primary role of a scientist is to do their job well: to create knowledge, and to use it to have maximum impact; to speed up the pace of knowledge creation and translation for societal good. Throughout your career you have opportunities to make a difference.”

Schmidt is a shining example of how to use a Nobel Prize to change the world for the better. He embodies why it is an important institution, despite several recent suggestions that awarding a Prize to a maximum of three scientists is out of touch with the way science is done in the modern age, or that prizes in science miss the point entirely.

“Humans need heroes – in fairness, our prize should have gone to the 60-odd people on our teams. But the limit of three means that we are seen as role models for the next generation.”

That effect was seen in spades over the last week at Lindau – every Laureate was swamped by young researchers eating up their every word, hoping for a clue on how to get past a thorny research problem or make the next big breakthrough. The inspiration of this event will last for years and reach across the world. And that is important in an era of fake news, anti-science sentiment and rising nationalist sentiment.

“Do we think that the world has too much emphasis on science right now?” Schmidt asks rhetorically. “I would say no. When does the common person get to interact with world-leading scientists and understand leading, world-changing science? I’d argue that the Nobel Prize is the only time, and that happens because the Nobel Prize is made into a big deal.”

He ended his keynote with an impassioned call to action.

“I ask you all to embrace your privileged role as one of the world’s most educated citizens. Make as much of your work as possible available for other scientists to amplify. Make sure you are always working to push the boundaries of knowledge rather than to defend your view of the world. Bring the world with you: know your biases, be inclusive, show patience and show respect to everyone around you. If we all do this, we can make a difference. And in 2019, we must make a difference. The world is waiting for us.”

Twenty young Academy of Science South Africa (ASSAf)-nominated South African (SA) scientists are at Lindau this year. Funding for the SA young scientists has been provided by the Department of Science and Technology (DST).