Professor Elizabeth Blackburn has called for a global agreement for sustainable basic research, modelled on the Paris Climate Accord, during her keynote address at the opening ceremony of the 68th Lindau Nobel Laureate Meeting. The proposed accord would see global support for basic research to help address challenges in health, nutrition, climate and energy, and encourage a fairer and more inclusive society for all. 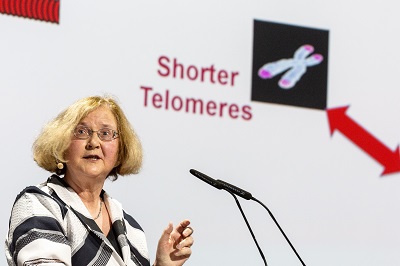 Professor Elizabeth Blackburn has called for a global agreement for sustainable basic research, modelled on the Paris Climate Accord, during her keynote address at the opening ceremony of the 68th Lindau Nobel Laureate Meeting. The proposed accord would see global support for basic research to help address challenges in health, nutrition, climate and energy, and encourage a fairer and more inclusive society for all.

Asked to discuss the connection between science, society and policy, Blackburn talked about the work she did to earn herself the Nobel Prize in Physiology in 2009, before turning her talk on its head and using the platform to launch a powerful new idea.

It started off light-hearted: “Let’s imagine a Lindau Agreement for sustainable, globally cooperative science research resources. Let’s try it out: change the Paris agreement, call it Lindau 2020 Action Agenda and Framework for Global Long-term Basic Research Sustenance, it might take a little bit of time to organise things.”

But as she went through the Paris agreement substituting appropriate words, her audience realised she wasn’t really joking and the laughs turned to applause. By the reaction of the audience, this is an idea whose time has come, and the Lindau Nobel Laureate Meeting is exactly the right place to launch a big idea like this one. After all, this is where the Mainau Declaration of 1955 (against nuclear weapons) and Mainau Declaration on Climate Change 2015 were signed.

“For science to benefit all of humanity, we need to focus on the critical issues that we face as a society, and that requires long-term basic research support to meet these challenges head-on,” said Blackburn. “As young scientists, you can bring clear thinking, and an appreciation for evidence-based decision-making in policy. Speak out and use the technology available to you to reach the people that need to hear you. Trust yourself and listen to you heart.”

She was speaking to a rapt audience: some 600 delegates have flown, trained, bussed and driven in to Lindau, Germany from a record 84 countries, along with a record 40 Nobel Laureates, and gathered in the newly rebuilt Inselhalle on picturesque Lindau Island. The event began with a playful introductory video that captured the spirit and sense of wonder that accompanies Lindau Nobel Laureate meetings, as well as a bit of the fun.

Over the next week, delegates and Nobel Laureates will interact throughout a packed schedule of presentations, formal and informal discussions, and other events designed to bring people together through science and its impact on society. The themes of the meeting include circadian rhythms (Prof Michael Rosbach and Prof Michael Young won the Nobel Prize for Physiology in 2017 for their discovery of the genes that control the cycle of activity and rest in most animals, also known as the genetic clock), and the value of science in the era of fake news.

Six young Academy of Science South Africa (ASSAf)-nominated South African scientists are at Lindau this year, looking to get involved in discussions and build connections with a global network of their peers. Ms Shireen Mentor (University of the Western Cape) is already inspired and excited for the week’s programme.

Being among so many people working on similar things underlines the importance of what we’re doing as scientists, she says. “I already feel more emotionally invested in my work, and connected to humanity through my role as a researcher.”